The Christiansburg Cemetery Company purchased Sunset Cemetery from Dr. Joseph Edie in 1891. Originally, the cemetery was established as a for-profit company and the stockholders were paid with a free grave plot.

The duel between Thomas Lewis and John McHenry was fought on May 9, 1808 on land now belonging to Sunset Cemetery. Both men died in the duel. This incident contributed to duels being outlawed in the State of Virginia. 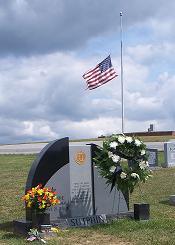 In March 2008, the Town of Christiansburg took ownership of the cemetery

Charles T. Edie was buried in the cemetery in 1857. Charles Edie was killed by another student at the college of Hampden-Sydney; visitors may still see the inscription on his monument reading“killed at Hampden-Sydney.”

Perhaps the most notorious resident buried at Sunset is Virginia Wardlaw, one of the murderous "Black Sisters." Wardlaw was accused in 1910 of murdering relatives for insurance money. Wardlaw is buried in an unmarked grave.

With a computerized database of over 15,000, Sunset Cemetery is a wealth of history, heritage, and genealogical research.