What started as a collection of taverns and rest stops along the Great Wilderness Road has grown into the New River Valley’s retail hub, pairing brand-name shopping and dining with locally-owned eateries and boutiques. Christiansburg is a place of past and present, with historic neighborhoods and innovative business and development existing side by side.

From the days of Daniel Boone, Davy Crockett and eventually Booker T. Washington to the post World War era that saw the opening of the Starlite Drive-In, Christiansburg has continued to grow while maintaining its small-town vibe.

We’ve compiled some historic resources, including maps of Christiansburg’s historic districts. But let’s take a more detailed look back at some of the most influential times in town history.

In 1671, the New River – the western hemisphere's oldest river – was discovered by early settlers of German, French, Scotch-Irish and English descent. Along the river, there were several Native American encampments, and conflicts were common between those tribes and the early settlers. As settlers began moving into present-day Christiansburg, they discovered that area was also inhabited by Shawnee and other Native American tribes.

In the late 1600s, Dutch priest Friar Hans arrived in the region, which led to the area being named Hans Meadow in the early 1700s.

What is now Main Street in Christiansburg crosses a barely perceptible ridgeline. This Eastern Continental Divide Line divides water flowing east to the Atlantic Ocean - via the Roanoke River basin - from water flowing west to the Gulf of Mexico - via the New, Ohio and Mississippi Rivers. In October 1763, by Royal Proclamation, King George III forbade Virginians to settle west of this line. Virginians considered the taking up of western land as their natural right. Shutting off access to this land was a provocation that accelerated the building momentum in Virginia for the coming American Revolution.

In the 18th century, the region was settled by Pennsylvania and eastern Virginia pioneers, and in 1776, Montgomery County was formed out of Fincastle County. The City of Radford, as well as parts of Floyd, Giles and Pulaski Counties, were all subsequently formed from Montgomery County land.

The Town of “Christiansburgh” – as it was originally spelled – was named in honor of Colonel William Christian, who was an early settler in the region, one of the first justices of Fincastle County, a member of the Virginia Legislature and brother-in-law of Patrick Henry. Theodore Roosevelt, in The Winning of the West, wrote that Colonel Christian was a “very gallant and honorable man.”

Originally a concentration of taverns and rest stops along the Great Wilderness Road (present-day U.S. Route 11), the original 1.1-square mile Town was established on November 10, 1792, by an act passed by the Virginia General Assembly. The Town of Christiansburg was later incorporated on January 7, 1833. 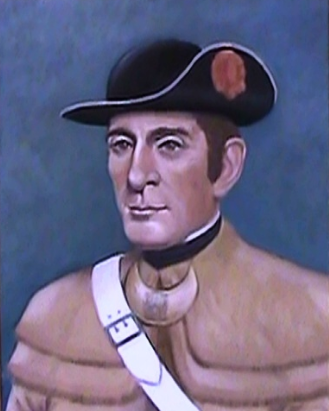 While not a full-time resident, George Washington was known to have visited Christiansburg during the early years of settlement.

Frontiersman Daniel Boone resided in Town for a time, and among records in the County Courthouse is a warrant dated 1774 for the arrest of Boone on a debt charge. The warrant was issued under King George’s name but marked “Not executed – Gone to Kentucky.” The debt was later repaid.

Davy Crockett lived in Christiansburg and served as an apprentice to a local newspaper printer for a short time. Crockett also worked at John Snider’s Hattery Shop, located on W. Main Street, for 18 months.

Christiansburg experienced significant growth in the early 1800s, and by 1840, the population had grown to 400.

Most residential growth was confined to Main Street and Cross Street (now Franklin Street).  Several industrial complexes developed around the Gardner Zink Mill west of Town and the Chrisman Mill along Crab Creek (on what is now State Route 661/Chrisman Mill Road). These two mills were responsible for the centralization of a number of area milling operations in the late 1700s.

New streets were laid out during the early 1800s, and additional construction included a number of churches and a public well and pumps, which were placed just north of the Courthouse in 1826. Ten years later, a public privy was built near the public square, and a new courthouse was constructed in March 1836 in the east corner of the public square. The Christiansburg (Cambria) Depot in the community of Cambria was established on the Virginia Tennessee Railroad line in 1854.

Downtown Christiansburg was the site of the Lewis-McHenry Duel on May 9, 1808. The rifle duel between Thomas Lewis and John McHenry, which killed both men, led to the passage of the Barbour Bill in 1810, outlawing dueling in Virginia.  Former Town resident Dr. John Floyd was the attending surgeon at the Lewis-McHenry duel and later governor of Virginia, as well as a member of Congress. He was also the father of John Buchanan Floyd, who served as governor of Virginia from 1849 to 1852.

Pennsylvanian artist Lewis Miller was fascinated with Montgomery County’s scenery, and throughout the 1830s through the 1850s, he often stayed in Christiansburg to depict Town scenes. After the Civil War, Miller retired to Christiansburg and spent his last 20 years living with relatives and friends. 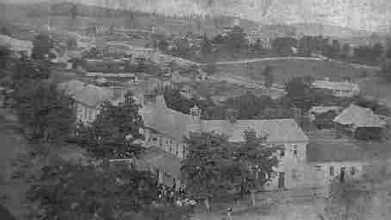 A view of Christiansburg from the courthouse looking northwest circa 1860s. (Source: Christiansburg, Virginia: Small Town America at Its Finest by Roy W. Kanode)

Many men from the Christiansburg area served under General T.J. “Stonewall” Jackson in the Shenandoah Valley during the Civil War. Christiansburg was invaded several times by Union Forces operating under W.W. Averell, and in 1864, the Union Army burned all of the Christiansburg Depot structures except the passenger station.

Confederate forces were active within the Christiansburg area and occupied a number of buildings in and around the Town. The Lattimer Plantation, which once stood on the Christiansburg High School site, was used as a Confederate headquarters. The nearby Montgomery White Sulphur Springs resort in Ellett Valley was utilized as a hospital from 1861 to 1865.

Near the end of the War, Union General George B. Stoneman and his men were in Christiansburg and had established headquarters in the Rice D. Montague home, which still stands at 109 E. Main Street. His men were stationed there when news came of Confederate General Robert E. Lee’s surrender at Appomattox.

Following the Civil War, the population of Christiansburg experienced a decline that continued throughout the 19th century.  In 1870, there were 864 people in the Town, and by 1900, there were only 659.

Booker T. Washington served as superintendent of the Institute from 1896 until his death in 1915 and was instrumental in expanding the curriculum to include both classical instruction and practical instruction in industry and the trades. The school was relocated to Lattimer Plantation in 1898 and was significantly expanded in the following years, growing to 14 buildings and 185 acres. George Washington Carver and other members of the Tuskegee University staff visited CII, and prominent industrial engineer John Wines Lester lived on the CII campus. 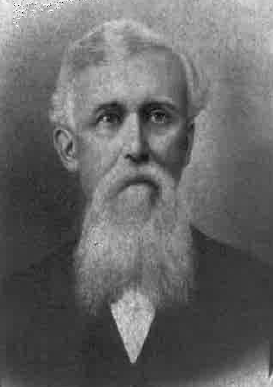 By the early 1900s, Christiansburg had taken on many of the functions of a regional center, with a bank, newspaper, Temperance Hall and photographer. Telephone service was provided by the Montgomery Intelligence Company, which was incorporated in 1886. Agriculture played an important part in the local and regional economy, and livestock were regularly driven to market down Main Street or taken to the Christiansburg Depot.

A fire following a temperance march in 1900 destroyed several buildings along West Main Street in the downtown area. Despite this fire, Christiansburg experienced vigorous growth in the first decade of the 20th century, growing from 659 persons in 1900 to 1,568 in 1910. The success of the Norfolk and Western Railroad's Christiansburg Depot, which served as the main shipping point for much of Montgomery County, contributed to much of this growth. Several new houses were built between the Town center and the Depot, and the Depot area community was eventually incorporated as the Town of Cambria in 1906.

The completion of U.S. Route 11 – the first interstate highway in America – was celebrated in Christiansburg when the last link passing through downtown was hard surfaced in 1926. By 1929, Virginia Polytechnic Institute was providing employment for the area's citizens through academic positions and mining jobs related to the school's coal-operated power plant.

The depression years were notable for Christiansburg for an unusual reason: Christiansburg’s Post Office was one of approximately two dozen locations in Virginia to receive Mural American Artwork or sculptures, which were created through Roosevelt's Works Project Administration. Christiansburg's mural is entitled Great Road and was completed in 1939 by John DeGroot. 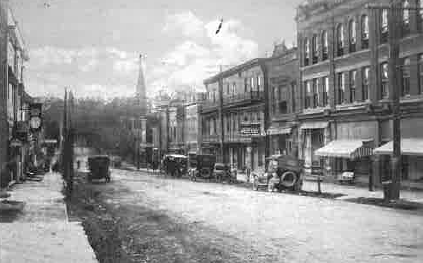 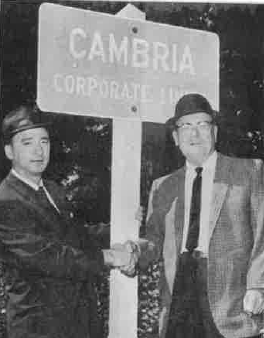 Following World War II, Christiansburg rapidly industrialized. The Southern Dairies  Plant (which later became a part of Sealtest) opened, and The Roberts' Motel – the first of its kind in Southwestern Virginia – also debuted after the war. Virginia Tech continued to expand, and by the mid-1950s, the school owned 2,000 acres in Montgomery County and employed more than 1,400 individuals. In 1953, the Starlite Drive-In opened and continues to operate as one of the few remaining drive-in theatres in the United States.

The 1950s were most noted for the number of devastating fires that occurred in Town. In 1954, Roses' 5&10 and Cavalier Furniture were both destroyed. Catastrophe struck again in 1956, destroying most of the businesses on East Main Street. In a single fire, the Town lost the City Market, Royal Cafe, Smith & Jones, Jennings Barber Shop and Interiors by Richard. Fires in 1957 claimed Simmons Shoe Shop, the Blue Moon Lunch and the rebuilt Jennings Barber Shop. A major fire on Main Street (now Cambria Street, N.E.) in Cambria in 1959 destroyed many of the oldest and most historic buildings there.

Having lost most of its tax paying enterprises and faced with failing utilities, the Town of Cambria proposed and was accepted for consolidation with the Town of Christiansburg on December 31, 1965.

The Town of Christiansburg continued to grow in the 1970s and 1980s, and two annexations added approximately 3,799 residents. A 1988 annexation incorporated Belmont Farms, the New River Valley Mall (which was under construction on the effective date), what had been the Virginia Tech Horticulture Farm (on the northern end of Town) and the Top of Christiansburg Mountain (on the eastern end of Town).

The Town underwent two boundary adjustments in the 1990s, which incorporated the Falling Branch Industrial Park and a portion of the Marketplace shopping center and the Christiansburg Industrial Park.

In 2000, the Spradlin Farms area began development, providing an additional retail space to the Town. In 2002, a large portion of both Blacksburg and Christiansburg, as well as a portion of Montgomery County, were designated as a part of an “urbanized area” based 2000 Census figures.

In 2007, the New River Center was constructed just north of the New River Valley Mall, which added another large retail development to the Town. Also in 2007, the Town of Christiansburg and Montgomery County agreed to an adjustment, which brought 49.816 acres and approximately 66 persons into Town (with one single-family house and Wheatland Retirement Community accounting for the population). In a 2009 boundary adjustment, the Town added the area of the Christiansburg Middle School, Harkrader Sports Complex and former Harkrader Farm, which brought in 170.318 acres and approximately six residents. 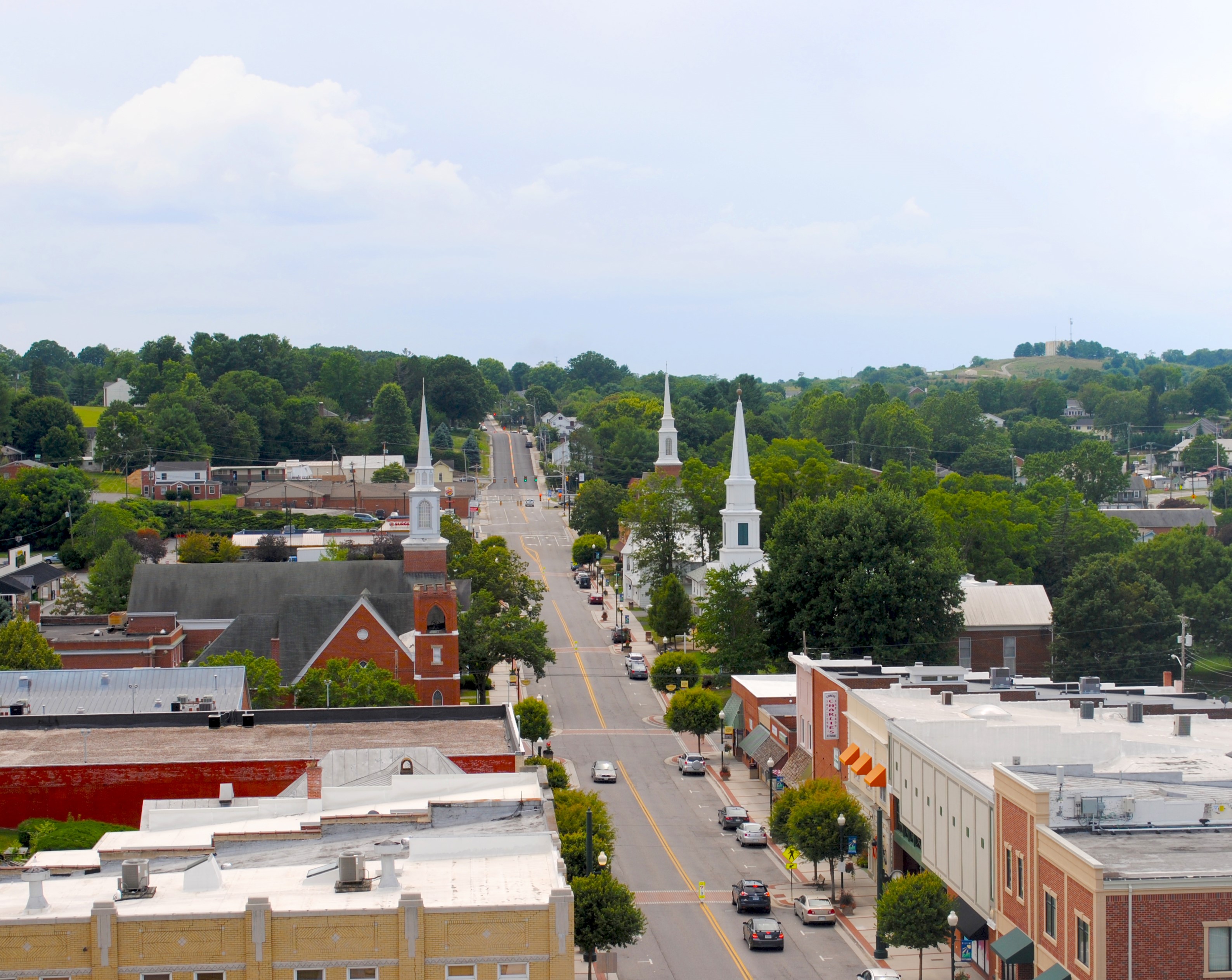