Create an Account - Increase your productivity, customize your experience, and engage in information you care about.

The Christiansburg Aquatic Center is a state of the art aquatic facility in the Town of Christiansburg. Built via a public-private partnership and serving as both a recreational amenity to citizens and as the home pool for Virginia Tech Swimming & Diving, the completed facility is a blend of creative collaboration and leveraging of resources.

Plans for the Christiansburg Aquatic Center originated from a 1995-2005 Parks and Recreation Master Plan. The Master Plan was envisioned as a way for the Town to invest tax revenues generated from retail growth back into the community. 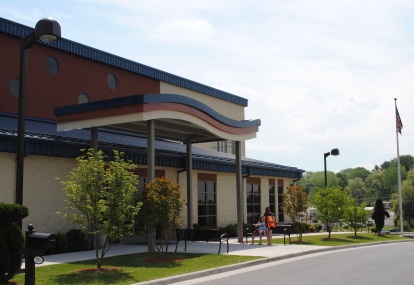 A survey component of the Master Plan revealed that ‘swimming’ topped the list of preferred activities for Christiansburg residents and was most frequently cited as a ‘recreational facility you would like to see built.’

While a pressing need for a new Recreation Center received immediate priority, an ‘aquatic center’ was slated for consideration toward the end of the Master Plan’s life span in 2004-2005.

In 2003, Reynolds Architects, in partnership with Gay and Neel, Inc. Civil Engineering, was chosen through a Request for Proposal (RFP) process to perform the architectural and engineering services for the new facility.

With the idea that an aquatic facility had potential to enhance local swimming and diving programs, the Town reached out to neighboring universities. Such a partnership, the Town reasoned, would also strengthen ties between school and community. Virginia Tech expressed an interest in use of the facility and a lease agreement was pursued.

An agreement with Virginia Tech, which would become finalized in 2009, led to the requirement of a 50-meter competition pool and added amenities to meet the university’s needs. Virginia Tech agreed to cover the additional $2 million in costs, in addition to a yearly fee of $94,000 to cover increased operation budget expenses. It was agreed that these expenses would be paid in twenty annual installments of $250,000 ($5 million in total).

Lionberger Construction approached the Town and its architect to gather information about the project. In the fall of 2006, the company then submitted an unsolicited proposal for the construction of the Christiansburg Aquatic Center (CAC) through a public-private partnership encouraged under the Public-Private Educational Facilities Infrastructure Act of 2002 (PPEA). No other competing bids were submitted.

Christiansburg opted to enter into a PPEA agreement with Lionberger Construction for the project. Some advantages of this partnership were that it provided a set construction cost and the opportunity to work with material suppliers and contractors of a known quality.

The Town financed the CAC with two separate bonds through VML/VACo Finance Corporation; $11.185 million to fund the original recreational aquatic concept and $2 million to accommodate Virginia Tech’s participation. The remaining cost of the $19 million facility was paid for with town funds. 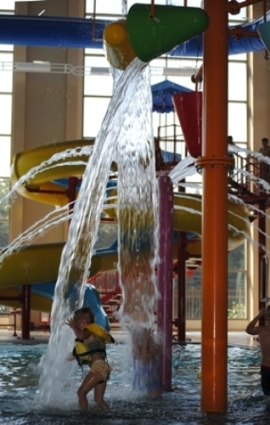 The Christiansburg Aquatic Center opened to the public in July 2010. The finished product, which encompasses 64,000 square feet, emerged as a new department for the Town. Managed by a director of aquatics who reports the town manager, the CAC brought 90 permanent new jobs to town with 15 full-time and 75 part-time positions.

The competition area of the Center features a 50-meter Olympic sized swimming pool, diving boards and a 10-meter diving platform. Two 6-foot bulkheads allow the pool to be configured for various swim meets. Balcony seating to accommodate 1,000 spectators features low glass walls that maximize the view of the pool and creates a welcoming environment for all visitors. When not in use for swim meets or practices, the competition pool is open for public swimming, deep water aerobics and educational classes.

Through a set of glass doors, the leisure swimming area awaits. A beach entry pool features a triple-loop, two-story water slide, spray features and a bucket fountain to delight children by dumping cascades of water. A heated therapy pool gives off a spa-like atmosphere ideal for physical therapy programs and rehabilitation, or for those wishing to relax in warmer water.

The CAC runs programs that cater to all ages. Swim education classes are offered to children as young as 6 months through adult. The CAC also offers a swim team, fitness classes, Red Cross training and lifeguard certification courses.

Special events and birthday parties are celebrated at the Aquatic Center as well.

The Town’s unique partnership with Virginia Tech has been an influential factor in the fast success of this facility; in addition to hosting the university’s home meets, the CAC has also taken the lead in Virginia for hosting age group championships. The meets can bring up to 800 swimmers, along with their families to Christiansburg and the surrounding area.

From its inception, affordable access and top-notch customer service have been priorities at the CAC. The facility is open 84 hours/week and offers both annual memberships and daily passes. These visitors have an impact on more than just the CAC. After taking into account an increase in meals tax, the Town has seen an increase in collected meals and lodging tax since the opening of the CAC. Though this increase cannot be definitively attributed to the CAC influence, its visitors have surely contributed to this figure.

Dedicated to the community and its visitors, the CAC and its staff continually look for new ways to generate interest and participation in their facility. 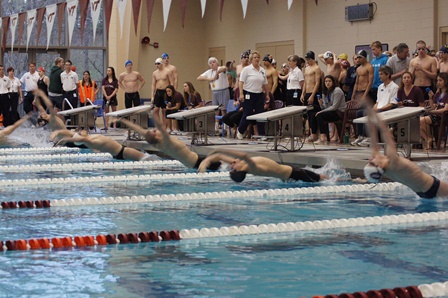